How do you feel about a "traditional" default layout?

With the latest update of Discourse, I’ve enabled a “traditional” forum frontpage, listing all the categories instead of showing posts from the start. Are the extra clicks to get into the categories you’d like to view worth it?

This topic is now pinned. It will appear at the top of its category until it is either unpinned by a moderator, or the Clear Pin button is pressed.

I think I prefer the previous layout, but maybe that’s because I got used to it? In any case I usually have the “Latest” page open so it doesn’t make much difference.

I prefer the previous layout too. Yeah, maybe this one is loading faster in mobile devices but not so practice for a big screen. Also, sometimes, i want to reply a post which i’ve “seen” before, which is not in “new” category anymore. So, actually, the problem is not the new layout for me. The problem is number of latest posts’ on homepage. I just wanna see 5 or more latest posts per category on the homepage.

And then, doesn’t need a homepage anymore :S

I like this a lot. I don’t know if it’s this theme or another change that I missed, but the excessive flatness that showed up in a recent update seems to be gone too, and I think it looks a lot better.

I don’t know if it’s this theme or another change that I missed, but the excessive flatness that showed up in a recent update seems to be gone too, and I think it looks a lot better.

That’s so weird. I spent some time tweaking some of the styling on the site to make it flatter…

@NotARaptor In my ideal world, the community homepage would be Latest. For a large percentage of active users, they don’t care what the categories are and will read everything and respond to what they’re interested in.

I got a lot of blowback about this being the default, since it was such a departure from the traditional forum layout. It’s curious that after using the category compromise layout for some time, there is blowback from using the traditional layout.

@AlobarNon It’s possible to show latest by categories. Check it. 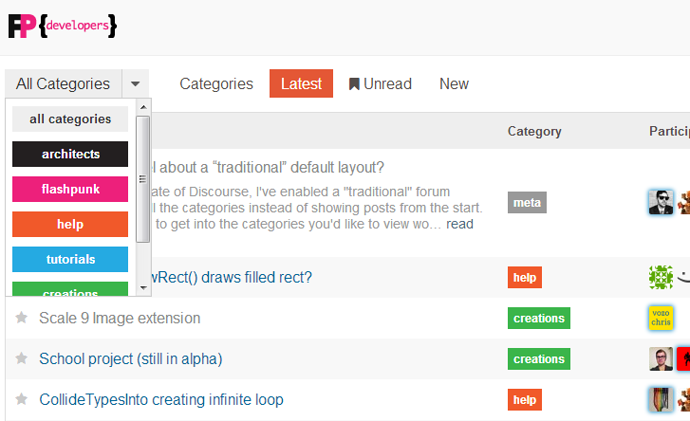 There’s good flat design and bad flat design, and the last time Discourse updated it looked horrible. It was hard to tell where messages began and ended and the navigation lacked any sort of definition. I might have just gotten used to it.

It’s possible to show latest by categories. Check it.

Sure, but one by one…

Actually thats not a big deal… We’re just playing a discussion game etc. LoL… Make what you want to do… As you wish… No problem for anybody… We’re still here, and that’s the important point.

Make what you want to do… As you wish… No problem for anybody… We’re still here, and that’s the important point.

The last time I did what I wanted, people had stern words for me.

I wish there was a user setting to allow a user to select his own default view. That would be nice.

…allow a user to select his own default view. That would be nice.

Just so there’s no misunderstanding, I don’t hate the default Discourse layout. It’s very different from what most people are familiar with, but it never got in the way of my using it efficiently. I’m honestly fine with whatever the most people are happy with.

I think perhaps it makes more sense for new users. But it’s not like the old one was particularly complicated - it just took a little getting used to.

I’ll echo what others have said and say the old one was better. I think, especially for a rather small community like this one, the old paradigm worked better and that’s why I didn’t mind the non-traditional layout. It was easy to check in and immediately see what had changed since you last visited.

I also liked the “non-flat” (it was pretty flat anyway iirc) layout better. The “flatness” seemed to be purposeless and in many places it lacked contrast where the other theme had it.

Also - it could be something else running on my computer at the same time or heavy load or something completely unrelated - but as I’m typing this post now, the editor is super laggy. I can type faster than it can keep up. Even when I hide the preview. (I think maybe it’s generating the preview even when it’s hidden?)

Anyway, not sure if anyone else (future self included) can reproduce this, but it’s kinda hard to write anything when the editor doesn’t keep up with you. ;)

Sorry to be so grumpy and complain about everything, but it’s my honest opinion! Overall, I think Discourse is good and I especially love that I can write my posts in Markdown. Keep up the good work!

Anyway, not sure if anyone else (future self included) can reproduce this, but it’s kinda hard to write anything when the editor doesn’t keep up with you.

I’ve had some issues where the preview falls behind, but I’ve not had issues with the text entry field falling behind. It’s all Javascript, so if your browser’s JS engine is taking a beating, you’ll see some lag. There’s also some local storage going on to autosave your posts in case your browser crashes.

Based on the responses here, I’ve set the default landing page to latest and reset the categories page back to the dual-column preview.

It’s all Javascript, so if your browser’s JS engine is taking a beating, you’ll see some lag.

Yeah, that’s what I figured. But this definitely never happened before the update. I usually tend to write my posts in a different editor anyway (especially so I can get tabbing right) then copy/paste, so it isn’t a huge deal for me. I’d be curious to know if anyone else is having the same problem, though.

There’s nothing suspicious (errors or warnings or anything) in my JS console as I’m writing this post, so maybe it’s just something with my browser or computer. *shrugs*

Ok, I wasn’t able to see the “traditional” layout because you already changed it, apparently. haha.

Anyways, I don’t really care. I just go to the New sections and then the Unread sections anyways, so I don’t miss anything, and that’s it.